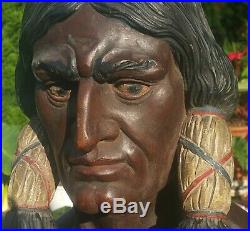 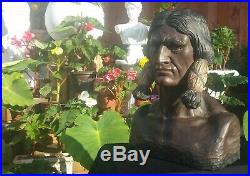 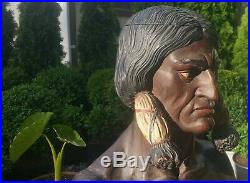 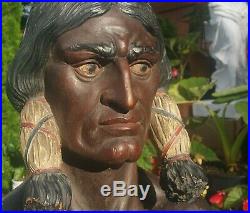 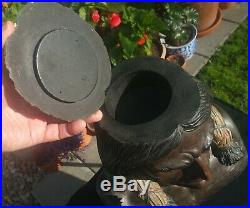 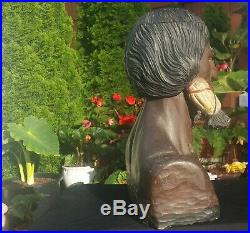 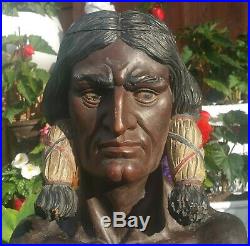 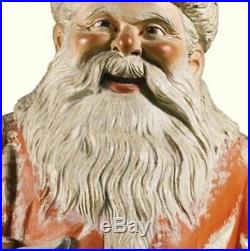 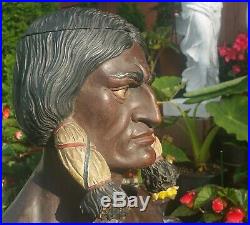 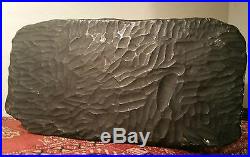 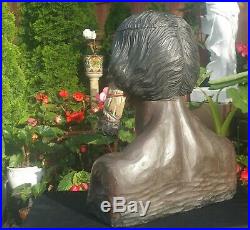 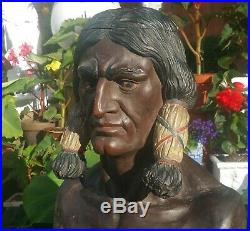 Life-size Cigar Store Indian Countertop Store Display. Pictured here next to a standard size 19th century tobacco humidor. Early American folk art at it's very finest. He was d esigned to sit on the counter, just left of the register, frightening little children with his menacing glance while their fathers chatted with the clerk! We are attributing the carving to Samuel A.

Robb of New York City who is best known for his cigar store indian & circus carvings. Art historians authenticate paintings by the artist's brush strokes and this same technique can be applied to wood carvers.

Search online for the super clear, magnified images of Robb's Santa Claus (carved in 1923) and compare the painting & carving styles. The eyebrow carving and the eyebrow painting are nearly identical (one with white paint, one with black). Same with the carved sharp-edged eyelids identical! And compare Santa's long flowing beard to this bust's long flowing head of hair identical!

Compare the dent in the cheek (pic 3 above) to those on the back of Santa's arm. Also, this paint is raw/rough, identical to his Santa.

Both carvings were spared a century of outdoor abuse and the original paint shows no signs of aging. This is best seen in the rough textured brown paint on Santa's belt which is identical to the rough textured browns on this bust. Do the same with Robb's Lord Dundreary (carved 1880). Find the online images that can be magnified and compare side by side with this bust. Compare how the pupils of the eyes are painted.

Also, the sharp-detailing in Dundreary's long flowing hair, most notably the identical center-hair-part found on the back of Lord Dundreary's head. Keep in mind that Lord Dundreary's hair is not quite as'sharp' because it's had several added coats of paint, this bust has just its one, original coat of paint, as it left the artist's studio. Again, with Robb's "Jack Tar" and "Baseball Player Show Figure": compare hair carving and the sharp cut of the eye lids. As with most antiques, the bottom is the best way to authenticate an object.

We have yet to compare the bottom of this bust with a confirmed Robb carving but they should have similar bottoms (pic 10 above). The finest trade carvings are animated and this scary fellow is.

He follows you around the room! We would argue that this is the finest cigar store indian ever to reach a public market! The 19th century Yellowstone geyser painting seen in the photo above was painted on a large, rare cigar box lid in the late 1800s by an early American explorer. A five pound sterling silver " Bug Basket " from Buckingham Palace, the most-prized possession of the last reigning monarch of The Kingdom of Hawai'i, an artifact from The White House and Porcellian Club (the birthplace of Facebook) and the first man to the moon's first appearance in Space are but a few of our most interesting pieces. Presidents, a Prime Minister and other Heads of State, Middle Eastern & European monarchs, museums, movie stars, billionaire software & oil tycoons and the World's leading interior decorators & designers. The best way to view our store is by'highest prices first'. The item "SITTING BULL cigar store indian statue vtg tobacco antique native american sioux" is in sale since Monday, March 4, 2019.

This item is in the category "Collectibles\Cultures & Ethnicities\Native American\ US\Non-Native American Crafts". The seller is "theurbanarcheologist" and is located in Tracyton, Washington. This item can be shipped worldwide.